Here, The McPin Foundation’s own Thomas Kabir talks about antibody mediated psychosis and some of the exciting research which has been done.

There is growing evidence that some mental health problems may be due to the brain becoming ‘inflamed’. In August BBC Radio 4 broadcast a programme about this entitled ‘The inflamed Mind’, which you can listen to here. The programme was fascinating and included interviews with some of the key researchers involved in this new field exploring the relationship between the immune system and mental illness. 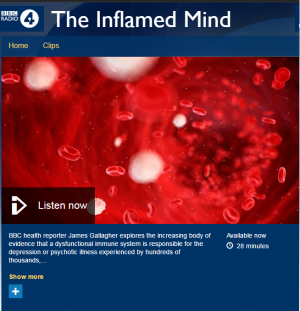 It was encouraging to see that the radio programme and accompanying BBC news article also included the perspectives of service users.

But what does ‘inflamed’ actually mean? If you get knee pain, you are usually advised to do some stretching, take some ibuprofen, and not exercise for a couple of days. The idea being that this helps to rest the inflamed knee and ibuprofen will help because it’s an ‘anti’-inflammatory. But coming back to the question. The Oxford English Dictionary provides a few definitions. The most relevant seemed to be ‘a morbid process affecting some organ or part of the body, characterized by excessive heat, swelling, pain, and redness’. In the case of your knee, if it’s swollen, a bit red and it hurts then you are told that it looks a bit inflamed.

Inflammation itself is caused by the body’s immune system. This is meant to protect us from infections caused by invaders such as viruses. But the immune system can sometimes over-react or attack healthy cells, leading to a number of conditions ranging from arthritis through to lupus.

But what happens when the brain becomes inflamed? Unfortunately, this can lead to a number of serious problems. But to some extent it depends on how the brain becomes inflamed. If it’s due to the immune system fighting a viral infection you could get Encephalitis. This can sometimes lead to psychosis with individual’s often needing treatment in an intensive care unit.

A dysfunctional immune system may also cause psychosis in its own right.

Belinda Lennox, from Oxford University is quoted by the BBC health reporter James Gallagher as saying that up to “one in ten” people with psychosis for the first time have antibodies “targeting part of their brain circuitry”. Antibodies are a key part of the immune system. They help identify and destroy harmful invaders such as bacteria and viruses. But unfortunately these same antibodies can disrupt the way cells in the brain communicate with each other and this can lead to psychosis. Currently, the McPin Foundation is supporting a study called SINAPPS which is looking into possible new treatments.

New evidence is also emerging which suggests that the brain becoming inflamed may also play a role in depression. Carmine Pariante of King’s College London is quoted in the programme as saying that “nearly 30 percent to 40 percent of depressed patients have high levels of inflammation and in these people we think it is part of the causal process”.

This has led to a great deal of excitement in the scientific community, which is reflected in the title of the BBC news article, ‘Depression: A revolution in treatment?’ This is for two main reasons.

Firstly, there is a clear indication about what might be contributing to someone’s depression or psychosis (inflammation of the brain). The exact causes of most mental illnesses remain unknown therefore anything that sheds light on this is exciting. Secondly, there are already approaches available to treat inflammation and these could potentially be used to help people with mental illness.  One such approach is anti-inflammatory medication.

In the SINAPPS study it’s a procedure called IVIG together with a drug called rituximab. It’s too early to say if any of these approaches will work. But at the very least identifying people with mental health problems suffering from inflammation might help doctors and others tailor more personalised treatments for them. This was one of the conclusions from a recent paper from Carmine Pariante’s research group.

Three things struck me when I listened to the Radio 4 programme. First of all is the connection between physical and mental health. The two are connected. Perhaps they should be treated as such instead of NHS services being broadly separated along ‘physical’ and ‘mental’ health lines with GP’s being left bridging the gap. Secondly, the level of excitement within the research community. A 2015 Lancet Psychiatry article makes an interesting point. This is not the first time that a possible physical cause of mental illness has caused excitement: “Early in the 20th century, there was great excitement when general paresis of the insane was shown to be due to syphilis and curable with penicillin, inspiring hope that similar organic causes might be found for other types of mental illness”. Why is the physical basis of mental health so exciting? Indeed this is the main focus of the remainder of the programme.

And lastly, that there are already treatments being used in a physical health context that might help people with mental health problems. The SINAPPS study is due to start soon. It will be interesting to see how things develop.

This article has been adapted from McPin Public Involvement in Research Bulletin, Issue 7: November 2016. Available to download here.

If you want to write a blog entry for this site, send your post to contact@mcpin.org.